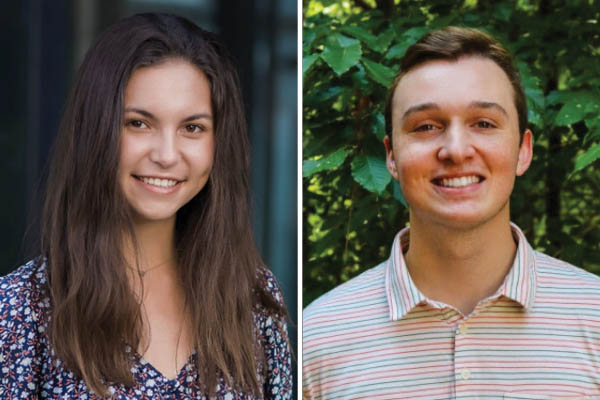 Ideliya Khismatova is a junior at UNC-Chapel Hill double majoring in Environmental Science (Quantitative Energy Systems) and Statistics and Analytics.

No, it’s not a mirage. You might be running on three hours of sleep during finals week, but you’re not just seeing things. It’s not a hallucination caused by tripping and falling on one of UNC’s wobbly bricks on your way down to South Campus. No, your brain isn’t tricking you – those really are solar panels on top of Morrison Residence Hall!

Those solar panels are just one of many renewable energy projects on UNC Chapel Hill’s campus. The Renewable Energy Special Projects Committee (RESPC) is a student-run organization that manages the money allocated by the Student Renewable Energy Fee to plan and implement renewable energy, energy efficiency and management, and energy education projects on UNC’s campus. The committee members worked together to implement what started as just an idea into a structure that won a national competition run by the EPA to see what commercial building in the US could trim down their energy usage the most in 12 months.

So, how does a project get funded?

Believe it or not, every student at UNC plays a role in this part. Every semester, $4 of each student’s tuition and fees goes towards the Renewable Energy Fee – totalling about $250,000 a year. As projects are brought to fruition, committee members, as well as a smaller group of voting members, vote on whether or not to approve the funding. A group of UNC’s faculty and staff who are knowledgeable in energy and sustainability, known as ex-officios, also play a valuable role in guiding students and advising throughout this process.

So everything is approved and ready for funding allocation! Now, we are one step closer to fostering a more energy efficient campus. Each project is unique, so there isn’t a clear cut path for the rest of the process. This frequently includes communication with different departments at UNC, including energy services, facilities, and Carolina Housing, as well as engineers and architects.

For example, the Curtis Solar Project began as an idea to supply the new Curtis Media Center’s roof with a solar rooftop that would provide the building with around 40% of its energy source. After about two years of planning and coordinating, RESPC allocated just under $100,000 for the funding of these solar panels for the Curtis Media building. In this project, RESPC members worked with several different departments, faculty, and professionals in order to generate ideas and technologies that will be used to improve the use of energy at UNC.

Now set to open at the beginning of 2022, this modern-style construction will bring UNC one step closer to meeting one of its Climate Action Plan (CAP) goals, which is to increase on-campus renewable energy. Mike Piehler, UNC’s Chief Sustainability Officer and spearheader of the CAP, views RESPC as “an amazing vehicle for student leaders to make a big impact on sustainability practice at Carolina.  It is an important part of Carolina’s sustainability enterprise and is poised to play a significant role in helping us reach our ambitious targets.” Piehler is a fond supporter of RESPC and the committee values his thoughts to help bring ideas to fruition.

The Curtis Media Center might be a new seedling planted on campus, but RESPC’s roots stem back to almost two decades ago. In 2002 and 2003, students successfully campaigned to get a referendum for a Renewable Energy Fee on the ballot during campus elections. In February 2003, the referendum was approved by 74.5% of students, creating the fee and RESPC. The Board of Trustees and Board of Governors approved the fee in 2004, and collection began in the 2004-2005 school year. The 2013 election made the fee permanent, though a bill is expected to pass that will require audits every four years.

This 2021-2022 school year, the committee consists of about 20 active non-voting members, as well as 6 voting members. 2 of these voting members include the current co-chairs, Ben Brown and Ideliya Khismatova. Ben is a senior undergraduate student majoring in Environmental Studies and Public Policy. He has previously interned at Southern Energy Management, a solar company in the Raleigh-Durham area, and is currently the Sustainability Intern at SAS. Ideliya is a junior undergraduate student majoring in Environmental Science and Statistics and Analytics. She is currently a Data Analyst Intern at Credo ESG Solutions, an environmental consulting group, and has previously worked as a data analyst at the Environmental Finance Center at UNC and interned at American Airlines. They both are super passionate about renewable energy and are happy to help UNC become as sustainable and energy efficient as possible!

Before them, though, RESPC has already entertained a plethora of successful projects. Renewable energy-related projects include the solar PV system on top of the Student Union and a passive/solar PV greenhouse for Carolina Community Gardens. In terms of energy efficiency and conservation, RESPC has funded the installation of LEDs in many of the University’s buildings and airflow reduction in numerous labs. Energy education projects are also a cornerstone in RESPC’s allocations, with funding several student internships and energy awareness posters around dorms. A more recent project that RESPC runs is the Efficient Freezer Rebate Program, or EFRP, that encourages laboratories at UNC to adopt more energy efficient freezers, as they can apply for a 35% instant rebate on their purchase through funding from RESPC.

This year, our most exciting projects include increasing solar access on UNC’s campus, expanding electric vehicle charging infrastructure, and improving the real-time energy monitoring capability for UNC faculty, staff, and students. Additionally, we can’t wait to see the three electric buses on campus this year for Chapel Hill Transit, especially since the RESPC logo will be glistening on the sides! Keep an ear out for the buses though, since they’ll be hard to hear given their quiet electric motors.

So, have you warmed up to the idea of solar energy yet? Want to learn more about the Renewable Energy Special Projects Committee at UNC? Make sure to check out the website, respc.web.unc.edu.